Jervis B. Webb Conveyor – Pioneers of the Modern Conveyor Industry

Ultimation’s partner for overhead conveyor technology is Jervis B Webb, now a part of the global Daifuku conveyor group. Our alliance with Jervis B Webb began with our first major project in 2012, and now we’re Jervis B Webb’s largest conveyor parts distributor and the largest integrator for Webb conveyor systems in the Midwest. 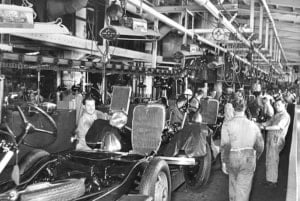 Webb and Ford – the Early Days

Young engineer Jervis Bennett Webb had a better idea. In 1919 he founded the Jervis B Webb company with the idea of adapting heavy chain conveyors used in the mining industry to suit Detroit’s fast-growing automobile industry. Webb’s breakthrough chain system was different than most conveyor chain. It was rivetless (= stronger), forged (= stronger and lighter) and easily assembled. It could go from slack to tensioned quickly without breaking. After the first order from Studebaker in 1920, Webb realized that most existing floor-laid chains got in the way of the production process. Webb then hit on the idea of mounting the chain above the working area, and the overhead conveyor as we know it was born. Henry Ford installed the first Jervis B Webb overhead conveyor in the Ford Walkerville, Ontario engine plant. The conveyor was so successful that Henry Ford immediately ordered 30 miles of overhead conveyor from the young but now successful Jervis B Webb!

After nearly 100 years as a leader in the conveyor and material handling, the Jervis B Webb company was acquired by a Japanese conglomerate, Daifuku in 2007. Jervis B Webb continues as one of the manufacturing divisions, with conveyor sales, design, service and spare parts for Jervis B Webb conveyors now provided by system integrators like Ultimation. Webb produces the track and the proprietary trolleys, and Ultimation engineers the systems and does the support structure, carriers for the parts, controls, and programming.

For nearly a century, Daifuku North America has been at the forefront of the material handling industry developing innovations that have changed the way products are manufactured, moved and warehoused. Their roots began in the automotive industry nearly a century ago when Jervis B Webb adapted the forged rivetless chain conveyor for Henry Ford’s first assembly lines, revolutionizing mass production. Webb conveyor became the dominant overhead conveyor system used throughout the automotive industry.

Need parts support for your Webb SmartCart AGC and AGV systems? Ultimation also provides spare parts support for these systems. We can help you with fast quotes, rapid shipping and great pricing. Contact our team today for assistance with any of these smartcart requirements.

Links to the Various Types of Jervis B Webb Conveyor Styles

You can find detailed information on the Ultimation / Jervis B Webb overhead style conveyors available on our website. We categorize them according to the way they move. Hand pushed is the simplest type as they are literally pushed along a track by hand. Motorized Overhead conveyors have one motorized track with a chain while Power and free conveyors are motorized with two tracks. Click on hand push,  Overhead or Power and Free conveyor type here as each has their own web page.

Today, Daifuku Webb specializes in designing solutions that meet our customers’ needs, whether it’s integrating technologies to create a fully automated system or engineering, manufacturing, and installing the most reliable products in the market. In addition to Jervis B Webb conveyor systems in automotive plants, Daifuku systems are installed in airports, clean rooms, and warehouses. We are helping companies increase productivity, reduce errors, recapture floor space, decrease cycle times and improve bottom lines. Whatever your business, when you choose Daifuku North America, our team becomes your team. And you can rest assured that the material handling systems we design for you are the most dependable and durable in the business. Learn more about Daifuku and the Jervis B Webb conveyor range of overhead conveyors at https://daifukuna.com/ Our online store is open 24/7. We have 1,000’s of conveyors and parts available at discount prices for fast shipping. Order by 3pm Eastern Time for same day shipping.

“Ultimation’s strongest trait was the ability to complete the installation on time, within budget and with no safety incidents to personal or collateral damage to equipment during the installation.  They were instrumental in keeping the crew motivated during the arduous installation and they worked second shift in order to meet SWRMC’s production schedule.

I enjoyed working with the Ultimation installation Crew and am happy to be able to provide this recommendation. I have great respect for Ultimation as a Company and as professionals and am confident that Ultimation will continue to exhibit positive performance in the business Industry.”

“You guys have really delivered for me on this project. I will be sure to include you for any future work that we do.”

“I have worked with Ultimation’s executives from the 1970’s until I retired from GM. I’ve always considered them incredibly knowledgeable in the Tire/wheel and conveyor business.”

“You’re a great team to work with. We really appreciate your good work!”

“We’ve worked through tough times together in the past, and we intend to work through them again. Your support has helped make us highly respected in the industry today.”

Hello, we need to let you know that this site uses cookies. By continuing to browse the site, you are agreeing to our use of cookies. Thanks!

We may request cookies to be set on your device. We use cookies to let us know when you visit our websites, how you interact with us, to enrich your user experience, and to customize your relationship with our website.

Click on the different category headings to find out more. You can also change some of your preferences. Note that blocking some types of cookies may impact your experience on our websites and the services we are able to offer.

These cookies are strictly necessary to provide you with services available through our website and to use some of its features.

Because these cookies are strictly necessary to deliver the website, refuseing them will have impact how our site functions. You always can block or delete cookies by changing your browser settings and force blocking all cookies on this website. But this will always prompt you to accept/refuse cookies when revisiting our site.

We fully respect if you want to refuse cookies but to avoid asking you again and again kindly allow us to store a cookie for that. You are free to opt out any time or opt in for other cookies to get a better experience. If you refuse cookies we will remove all set cookies in our domain.

We provide you with a list of stored cookies on your computer in our domain so you can check what we stored. Due to security reasons we are not able to show or modify cookies from other domains. You can check these in your browser security settings.

We also use different external services like Google Webfonts, Google Maps, and external Video providers. Since these providers may collect personal data like your IP address we allow you to block them here. Please be aware that this might heavily reduce the functionality and appearance of our site. Changes will take effect once you reload the page.